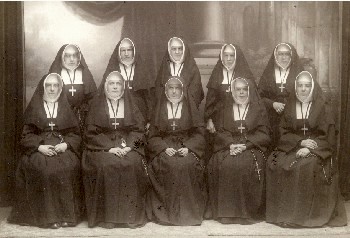 The story of the founding of our Congregation goes according to the growth and vocation of the spirituality of our founder, Elisabeth Gruyters. She was born and baptized on November 1, 1789 in the village of Leut, Belgium. Even though Mother Elisabeth lives in a dangerous and anti-Catholic environment, she has a close relationship with God.

In 1821, Mother Elisabeth left for Maastricht. In Maastricht the effects of the French Revolution were very clear. The monasteries were closed, the church was used for military purposes. In general the population suffers from poverty due to terrible looting.

In 1821, Mother Elisabeth worked first as a housekeeper for the Baron de Roos Waldeck family, then after that for the wealthy Nijpels family.

A few years after She lived in Maastricht, churches although badly damaged were reopened to accommodate the faithful who came to pray and praise God. Mother Elisabeth is one of the people who frequently visits the Church of St. Servatius, St. Mathias and St. Nicolas, where the statue of Maria Bintang Samudra was enthroned.

Although Mother Elisabeth worked as a housekeeper for the Nijpels family, she played an important role in their lives. For seven years Mother Elisabeth took care of Mr. Nijpels' wife. By the time she died, she succeeded in convincing her to make a general confession and receive the Sacrament of the Sick which was quite extraordinary at that time, because for years this family had closed themselves off from God and the Church. Mother Elisabeth also spent a lot of time praying and shedding tears for the conversion of Mr. Nijpels. It was only after ten years that Mr. Nijpels was converted.

After living in Maastricht for many years, Mother Elisabeth became increasingly convinced that this city needed a monastery, a monastery that would serve the poor and oppressed, a religious group who would serve God sincerely and perfectly. For her it is the same as which congregation or rules will be followed as long as God is served in His people, like the sick in Calvarienberg. Children work in factories and they live on the streets. She has a great desire to take part there, but due to her age is not possible. However, Mother Elisabeth did not lose hope.

Over time, her love for God grew deeper. Mother Elisabeth often wrote in her book that she could not find enough words to describe clearly how she experienced God's infinite presence and goodness. One time when she prayed at the cross, her heart was burning because of her love for God, she stammered praying for these words:

"O Lover of my sweet heart, give me a part in Your sorrow. May my heart flare with love. Make me proficient in Your devotion, but it does not benefit me, even for the safety of fellow human beings."

From then on, Mother Elisabeth prayed every day which later became the prayer of the whole Congregation.

On the Feast of the Assumption of Mary, Mother Elisabeth attends mass at the Church of St. Nicolas. During the Mass her great longing encouraged her heart, so that she did not hear or see anything from the great celebration. Then Mother Elisabeth knelt before the sacred statue of Maria Bintang Samodra and prayed. In her prayers Mother Elisabeth no longer begged to be admitted to a monastery. Instead she prayed that a monastery would be erected in Maastricht where God would be faithfully served. In this situation, her faith is more firm, the love that blazes with tears to her heart gives her peace. Suddenly she heard a sacred agreement from Heaven and the word agreement was none other than this: "It will happen"

December of the same year, Mother Elisabeth went to the Church of St. Matthias for confession with Father Maijel. Finally she was inspired to leave and offered to join the newly founded monastery on the Lenculen road. After confession, Mother Elisabeth conveyed the plan to her confessor, but he gave her no hope. He explained that her age was old, Mother Elisabeth did not have enough talent and money. Moreover, there must be many people, besides herself, who will apply for acceptance.

After eight days, Mother Elisabeth had the courage to introduce herself to Father Van Baer. Heartily pounding, Mother Elisabeth followed Father van Baer to the Sacristy after he led the Eucharist. She introduced herself and announced her wish to be accepted in the newly founded monastery as a household work sister. But he said that there were no differences between the clusters. They will all work together as Sisters of Charity. Then he accepted her as Sister of Love St. Vincentius a Paulo. He told her with full confidence that among those who registered, she was the first woman to make him dare to start a monastery.

On April 29, 1837, the party of St. Peter, the martyr, God gave Mother Elisabeth and Sister Maria the courage and strength to begin their work. They received various comments from the public, that they are poor and the city of Maastricht has been a closed city for six years. However, with full faith and hope, they began to clean up the rented house on Lenculen Street. They are lacking in many ways, even they do not have a chair to sit. They also don't have heaters to warm their small homes.

Father van Baer sent two sisters from Den Bosch. Their names are Sr. Theresia and Sr. Francisca. The two sisters taught Mother Elisabeth and Sister Maria how to become religious and helped in their new work.

In May 1837 they began accepting poor children, in the corridors of the church of St. Servatius. They teach catechesis, sew and educate how to pray and love God. The Good God blesses their efforts. The number of children who come increases every day. With so much work, these sisters need more help with energy.

On October 5 of the same year, the sisters received additional assistance when Sister Anna entered the convent. The arrival of Sister Anna was very encouraging to them. But on October 10, 1837, two sisters from Den Bosch were asked to return to their communities immediately. They received word that their abbot was seriously ill. Mother Elisabeth thought that would be the end of their monastery. She felt that they were like three fish out of water, without help and support.

Sometimes people come to their community just to shake their hearts. But they continued to put their trust and confidence in the Divine Organization.

On March 1, 1839, Sister Coleta began work at the Catholic Orphanage. A few years later, more sisters came to work there. At first it was very difficult for them to start work. They were incited so as not to obey the sisters. This situation lasts more than 16 years. Mother Elisabeth always encourages the sisters to be patient and always look at the suffering of Jesus.

In 1857, Father Schijven, parish priest and dean of the church of St. The new Servatius looked carefully at the spirit and goodwill of the sisters. Finally it was decided that the sisters would carry out the responsibility of looking after the welfare of the orphans, both Javanese and spiritual.

Mother Elisabeth's desire to serve the sick in Calvarienberg has always been her concern. So with the increasing number of sisters she became even bolder offering their services there. But the Board of Directors really opposed the idea. Even one member of the Board of Directors swears as long as he is still sitting on the board, they will never be accepted. He further commented that their religious clothing was more than enough to cause people to fall ill. Not long after, when the person died, Mother Elisabeth tried again. Father Commissioner of this institution also urged the Board of Directors to accept the sisters. Based on Mother Elisabeth's experience, knowing the atmosphere between the sick and those who were dying was filled with antipathy, jealousy, hatred and blaming each other. Although the Board of Management is still reluctant to accept, they are also urged by the community to receive services from the sisters.

So on August 1, 1843, five sisters began working in Calvarienberg. The good sisters are satisfied because they can care for the poor patients. Gradually the Board of Management began to appreciate the efforts of the sisters and even asked for additional sisters. And as we progressed in Calvarienberg, many sisters were sent to work there.

In 1840, the Congregation moved from a rented house on the Lenculen road to a newly purchased house in Vrijthof. But to accommodate the growing number of sisters, a house behind the church of St. was purchased. Servatius in 1844. The house was once part of a church built around the 12th century. This house is connected by an arch that was built as a way for priests and other church leaders. Because of this the arch connecting the Church and the new house occupied by the sisters was well known to the community. Since then the Sisters of Charity are known in the Netherlands as "zesters onder de bogen" or "Sisters under the arch". The arch also gives a symbolic meaning to the sisters: it is the link between the Church and the world. A Congregation that bridges God and mankind.

Until now the sisters are known as the Sisters of Charity of St. Carolus Borromeus from Maastricht. St. Carolus Borromeus was Archbishop of Milan in the 16th century. He was not only known for his enthusiasm in carrying out the decisions of the Council of Trent, but also because of the charitable work he had done. When a plague struck Milan in 1576, he treated patients. He always delivered the Blessed Sacrament to them. His spirituality and ideals in living the gospel have inspired the sisters to continue their loving work.

On June 26, 1864, Mother Elisabeth finally met the Beloved and Her Beloved. She died at the age of 74 and was buried in the funeral of the Church of St. Peter and Paul at Wolder. There were 54 members of the Congregation at the time of her death, not including those who had died before her death.